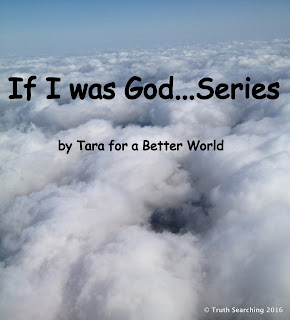 If I was God, I would not tempt my children to do evil.  The biblical book of Genesis talks about a god or gods setting up a tempting tree called The Tree of the Knowledge of Good and Evil and instructing his/their newly-made human couple to not eat from it, else they'd face execution.

Of course, the story is nonsense in so many ways, and I've already laid that out in depth in the following posts:

A Liar and Murderer From the Beginning

The Tree Story is Impossible

The Tree Story is Impossible: Part 2

Knowledge of Good and Evil: Good or Evil?

But let's pretend the story is real.  Let's pretend an advanced being created all living things on this planet and set up that tempting tree.  Why did he set up a tree with that name?  Why would he create a tree whose fruit would help you know right from wrong and then threaten to kill you if you ate from it?

But then let's go further and ask why any god would tempt any human or other animal to do something that he would exact punishment for if said human or animal gave into temptation.  That is the big question here.

Many years ago, when my firstborn was an infant, I read a sample few pages online of a book entitled To Train Up a Child by Michael and Debi Pearl.  I was quickly horrified by the contents.  In the years since I've read other excerpts posted all over the Internet by others who have read the entire book and were also appalled.  The book is basically a child abuse manual, but it uses the bible to justify the abuse.  It's pretty crazy that some of us read the bible and came away with a stronger-than-ever desire to treat our children with gentleness and respect and to strive to guide our children the way Jesus would do so, and yet other people apparently have read the bible and think they need to act as fierce dictators, tyrannically and cruelly oppressing their children.

Since I've read the Genesis story just as it is, though, as well as all the other horrible stories like God mind-fucking the Egyptian pharaoh, I understand.  I see how these people get these ideas and justify them.  Of course, I do believe that people who naturally want to teach lovingly and lead by example, like Jesus, are prone to grab ahold of those teachings for confirmation, whereas people who are naturally tyrannical are drawn to the twisted parts of the bible in order to confirm their desired methods.

In the aforementioned book, the authors spoke of deliberately enticing infants with pretty objects and then hitting them after the infant grabbed the items.  It also discusses horrors unrelated to temptations, like pushing a child in a pond to teach them not to play near it, making a child touch a hot surface to teach them they can be burned, and pulling a little four-month-old infant's hair when he or she bites during nursing when their teething gums hurt!

If I don't want my children doing something, I try to get them not to do it.  I sure as hell do not deliberately entice them to do something I truly do not want them to do!  What in the world?!  Who has ever heard of such an insane concept?!

When I tempt, I want the person to do something.  That is what tempting is all about.  If a parent is tempting a child in a case in which the end goal is to punish that child, the parent is a sick individual and not fit to parent.

If I was God, I would not tempt my creation to do what I deemed as evil and worthy of death.